On the personal side, I have had a tremendously busy and gruelling time since I arrived in Caen. Communication has been difficult with the lack of English speakers and very moody and occasional unpleasant behaviour by a few, however this time has also been full with adventures and meeting some really lovely and fun people who just came to watch the Alltech FEI World Equestrian Games 2014 in Normandy and to cheer on their favourite riders, and some few who are actually working at the Games; a tough yet knowledgeable and cultural experience where difficulties were faced, unlike other international events I have attended and covered in my 10 years with HORSE TIMES. As for the professional side, sometimes, one could only get to understand what kind of effort is excreted in order to deliver at an international event when you get to “physically” experience it. Because sitting at your desk from afar and imagining that matters go smoothly, is never the case.

I have been on a very low carbohydrate/medium protein diet for many months and have struggled to find soft food since I arrived to Caen. According to the spectator guide provided by Organisation, there should be 15 restaurants around D’Ornano Stadium where the Media Centre is located. I have found only four: a pastry shop, an oyster bar, the Chicken Chika Kebab place and a pizza thingy. Everything around here is all about croissants, bread, butter, jam, cakes. It is mad! I have asked for a special nut delivery all the way from Cairo because if I continue eating croissants, I’m bound to go into a croissant coma.

THE “NIGHTMARE ON ELM STREET” HOTEL AND THE LOCO SPANIARDS:

If you read my past blog 3 >> http://tinyurl.com/p2y5gts you would understand the title. Anyway, last Wednesday one of the receptionists was complaining about some “annoying” Spanish speaking guests. I realise that the hotel is tiny and any noise can be heard, and usually, reception closes off at 9 pm and you are given some code to open hotel door. Thursday night I return to the hotel and a bunch of loud Spaniards were standing by the door, and in the rain. I am not sure what started it, but intrigue kicked off and we all started to chat and laugh, and continued to do so for a good hour. Mercedes, Luis, Raul, Martha, Tote, and Yulanda, were all “obsessive” dressage fans and were here to cheer on their Spanish riders. They were in no way annoying; they were animated people, just like the Spanish dressage riders who participated at the Games, and were simply warm and bubbly, here in Caen for fun and to enjoy life. It was really great to meet them.

THE RUSH FOR THE WELLINGTONS:

Yesterday on Saturday the 30th, the eventing cross-country took place at Le Pin National Stud, or as the French call it, the “Versailles for Horses”. It was a marvellous 2,471 green acre estate in the Orne county of the Lower Normandy region, around 70 KM away from Caen. The day before I was set to head off at around 11 am to watch the competitions but faced quite a problem.

You see, unlike show jumping which takes place inside a rounded or rectangular arena with spectators around, cross-country happens in a green forested area where the ground is not levelled, is deep and steep, and is wet and very muddy. I had to watch the competitions in person (not from inside a Media Centre on a screen) as this is an Olympic sport, except, I only have super expensive shoes to walk around in. As a consequence, I had to leave the Stadium on Friday at 9 pm, rush to the Games Village (a 20 minute ride away) and find a shop that sells “reasonably priced” Wellingtons. Everything is pricey in France and I won’t even get started on the taxis, but I wasn’t going to spend on rubber boots! Where the devil would I wear them in Cairo? The expensive shoes I buy are neatly packed in their boxes and I don’t even wear them in Cairo (worried they might get ruined) let alone Wellingtons! Thankfully, I found this trendy shop at the Games Village, Tom Joule, and they were selling some really speckled fashionable Wellingtons. Their Customer Service was not from this earth and all the friendly and lovely ladies who worked there (Lexi, Katie, Suz, Molly and Scarlett) were very sweet and great help and were patient about my picky enquires about the boots. Katie gave me a 10% discount! So thank you Tom Joules!

TOFFI AND VON KORFF THE SAVIOURS:

My assistant Aya and I were due to head to Le Pin Stud by shuttle bus but instead Jacques Toffi >> http://tinyurl.com/mebmyem offered to take us with him in his Range Rover. Again, he and his working partner Ludwiga von Korff (Mikki) moved all their heavy and photographic equipment from their locations inside the car and made room for my assistant Aya and I. We started on the road at 6 am and arrived by 8:30; it was cold, misty and wet.

By the time we arrived, no spectators were there and we had to figure out where the Media Centre was located in order to set our equipment and laptops. No signs were available and we couldn’t make out where the Media Parking was located. Toffi parked in a spectator parking lot located 1.5 KM away from the main entrance. He had a pullie where he placed all his heavy gear, and I was carrying heavy stuff too! But we had to pull the pullie through a steep street as to get to the entrance. Once in, the Media Centre was located down below, 500 m down another steep path, in mud and in wet grass. I work out at the gym, and all this pulling and carrying required a huge deal of strength and push, not an asset Aya acquires.

After settling inside the Media Centre, it was decided that Aya stays to manage social media and I will head off with Toffi deep into the course where he would be shooting some specific fences. He spoke to the Photo Manager who explained the rules and where to go, and where not to go. Jacques had asked about a specific fence by the VIP Tent and the Manager told him that he could settle his gear there and shoot his photos.

Toffi carried his big lenses and so did I, and we walked 3.5 KM deep inside the wet, muddy, and unlevelled course until we reached the VIP Tent. By the time we got there, we faced difficulties with the security guards who wouldn't allow us to settle by the Tent in order to shoot that specific water jump Toffi was aiming for. Why I asked? They said it was reserved for the VIP Photographer hired by Range Rover, a sponsor of the Games, and that we needed to have special VIP bracelets. This was quite usual for people working at the Games to be misinformed as the Photo Manager told us we could go anyway. What the security men who only spoke French didn’t realise was that there was a fiery bomb standing next to them (i.e. me), and that it was so about to go off next to them and next to the VIP Tent if Toffi had not told “it” to “let’s get out of here”.

Finally, we settled in a spot and Toffi started to work. The moral of the story is that he as a photographer was at the Games to take some really amazing shots of all disciplines, and I was there to report on the Games – however everything was simply complicated. Our jobs were not made easy for us but the opposite. Toffi and I were at that spot from 9:30 am (competitions started at 10) until 4 pm and he photographed 91 riders. He did not move all day, not to eat, and not to drink. This is the job of equestrian photographers, to sit and take photos of different riders and different horses. In cross country it’s different; you photograph specific fences and specific turns or gallops, and can never get photos of several other fences like in show jumping.

There were around 35,000 spectators at Le Pin Stud, and by the time we left and got back to Caen, Toffi was singing to keep himself awake, I passed out in the car and Mikki had lost her voice. By 10 pm, we were all in bed, snoring out all the exhaustion.

Show jumping competitions will kick off after tomorrow on Tuesday the 2nd. We are very excited about watching it and about seeing many Arabs compete and hopefully, achieve some good results. Saudi, Egypt, Morocco, the UAE and Qatar will be represented. My pomoms are ready! 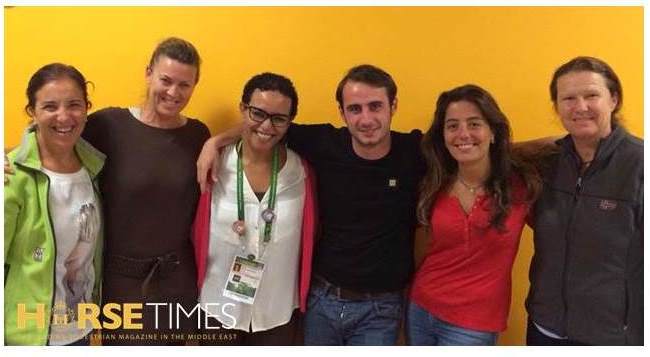 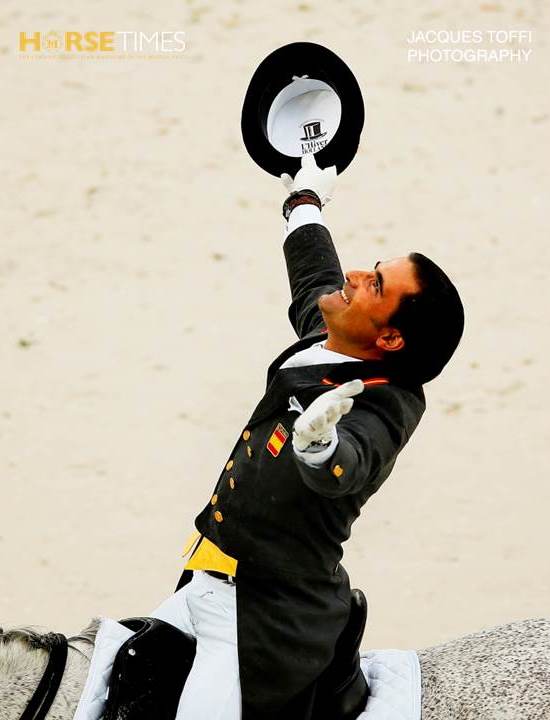 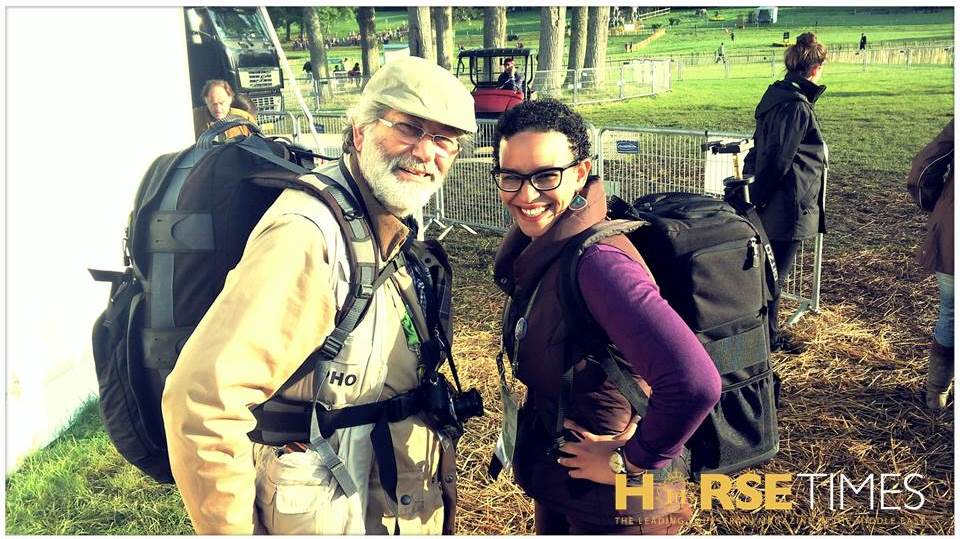