WHAT IS THE MEANING OF “PASO FINO”?

“Paso Fino” may be translated from Spanish to English as “Fine Step,” due to the smoothness, elegance, and well-coordinated movement of the four hooves. In Paso Fino, each hoof moves independently from the other three hooves in a perfect succession, which translates into a rhythm of four by four. Thus, four independent quick beats or sounds are heard when the four hooves hit the ground during every cycle, one sound for each hoof. The evenly alternated movement among the four hooves makes the Paso Fino an isochronic gait.

Note: In gaits, a cycle is completed when the horse moves each one of the four hooves one time. A gait, then, is a succession of similar cycles.

The maximum smoothness of a Paso Fino depends on how perfectly the horse performs the gait, using an equally alternated sequence of its four hooves, as follows: 1) a hind leg; 2) the same side foreleg; 3) the other hind leg; 4) the last foreleg. For instructional purposes, the sounds produced for this sequence of four beats are like “TA - CA – TA – CA,” respectively (see photo below).

IS THE PASO FINO A NATURAL GAIT?

A Paso Fino horse is born with the natural ability to perform the gait. This means that the Paso Fino gait is neither an artificial gait created by the rider nor a gait that takes years of training. Therefore, young riders and new riders are easily able to ride Paso Finos and maintain a smooth gait.

Although the Paso Fino gait is natural, these horses require training like any other breed of horse. However, training is not oriented to changing the gait, but rather allowing the horse to learn all of the rider’s commands and achieving a balanced gait with perfect symmetry, while carrying extra weight on its back. In addition, during the training process, the Paso Fino horse gradually develops the muscles to perform its gait in a collected manner, with the hind legs properly underneath the abdomen.

Their bloodlines, while not known exactly are thought to have come from crosses between Spanish Jennet mares and Andalusian stallions. Jennets are known for their smooth amble and Andalusians are trotters, as it was found that mares were more likely to transfer the smooth gaits than the trotters.

Different Paso Fino lines have been developed across South America including Columbia, the Dominican Republic, Cuba & Peru so their bloodlines vary by geographic & climactic conditions as well as the needs of mankind. However there are some generalized characteristics that seem to run true throughout the breed.

Head is small with a slightly convex profile, neck is medium in length, upright & arched, chest is medium wide, back length varies, legs are straight and slender and hooves are small.

Origins: The Trote en Gallope, Trote y Galope horse is only about 60 years old and comes from Colombia. They are the result of crossing the Andalusian with the Colombian Criollo or Colombian Paso Fino. The resulting animal is both handsome and graceful.

Physique: Neck is short and legs are long & strong
Traditional Colors: All colors

The Colombian Trocha horse belongs one of the four modes existing within the Colombian criollo horse race, which are: fine, pure Colombian trail, trail and canter and trot and canter. In step copies fine move by bipedal side successively and alternately , producing two times with each biped to perform the full shekel or beaten four times.

In the gauge the displacement is bipedal diagonals also four times because the hindlegs are delayed a fraction of a second longer than the above to make the support. For this reason the sound that identifies it is tras, tras, tras, tras, other than the trot, that being two times the sound produced helmets to ground contact is tas, tas, tas, without the "r "intermediate identifies the four days of the trail.Sequentially, and fractions of a second, on the trail is a tripodal support post, with no previous tripodal support (Biped is the set of a hand and a leg, it is called lateral when the same side and diagonal when different side).

The "rate" which is the name in Creole slang pace or speed of execution should be fast for fine pitch and gauge, medium, for Trocha and slow for Galloper Galloper trotter.

As the trail four times, like the paso fino, has simultaneously as Pussycat two supports to the floor, and every few days, three. The softness in its displacement is usually intermediate and fine pitch and jogging.

There is a gen "gene", which in this case is presented as a recessive-inherited from their ancestors Berber-called (p) that determines and authorizes some of the breed Colombian criollo horse to "amble", meaning bipeds scroll side to fine pitch. Copies of the same race, lacking the gene, moving by "diagonal", by moving their successive and alternating diagonal bipeds, four times for the trail and two for trotting. This will depend, inter alia, cadence speed with inherited by another series different genetic or gene combination (p) determining, as said, the lateral displacement and which can be genetic scheme (TT) or homozygous ( Tp) heterozygous.

There are two types of trail: the classic, quick cadence, also called "pure Colombian Trocha" and a slower galloping arrangement, being called to copy the running "Trocha Galloper". By having a greater action of the forelegs and, due mainly to the front footprint generally tends to be repisada by subsequent Trocha horse performs best in areas of irregular topography. That is why in past times the trail was preferred Andean departments and broken topography as Antioquia, flat counter somas other departments, it was preferred over fine. The modality of the trail, is also a fundamental difference foreclosing on the paso fino, because, while in step comes first leg lateral biped hand and fall behind in the trail arrives first diagonal biped hand and leg slightly delayed.


The horse Trocha, as in the other forms of the CCC race, must have good movement and fluidity in execution speed and proper cadence in rhythm. The exaggerated speed, combined with minimal translation are antagonistic tendencies to races called "chair", which belongs to the criollo quintessential Colombian races, as their name implies, were created by man for pleasure and the need to ride, which means they must carry a rider smoothly and comfortably from one place to another . 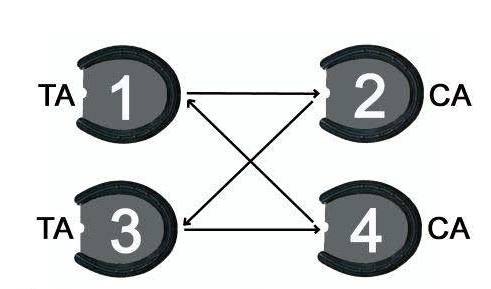 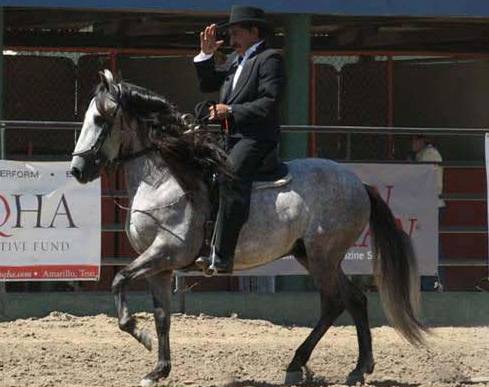